How POS Marketing Technology Will Improve Your Company’s Productivity

The “Great Recession” and Corporate Productivity

Watching the business news networks, reading Forbes, Fortune and The Wall Street Journal and talking with our customers and prospects, it certainly appears the US economy is today back to “pre-Great Recession” levels.

In most cases, business reporting suggests companies seem to be at least as profitable as they once were, and in many cases, companies are even more profitable because of the belt-tightening exercises they initiated during the “Great Recession” (GR).

It’s difficult for me to believe that we came out of the recession, technically, in June, 2009; riding on a newfound wave of rapidly rising productivity.

The reason for this productivity, of course, was that companies and their remaining employees were making do and doing more with less. Productivity gains by the end of 2009 were up almost 6% according to government reports.

A sign on the wall of one of our customer’s break rooms goes a long way to explaining why, and how such productivity was achieved:

Where Are We Now!

Now, five-years later, employees — less likely to be living in fear of being laid-off — are starting to move on to other opportunities and their former employers are finding it increasingly difficult to find replacements. The result of the country’s improved economy and many companies’ improved productivity is, oddly, declining productivity.

Annual productivity has now fallen by almost 5%, now averaging a meager 1% or less, according to government statistics. Although hopefully partially weather related, productivity in Q1 2014 fell below productivity in Q4 2013 — Not a good sign.

The impact of falling productivity is possibly due to the overall economic contraction, including reduced spending on consumer goods, construction, and durable goods, as well as the increased possibility of another recession, based on the official definition*.

But, before we resign ourselves to that fate, perhaps we should ask, what is the reason for this falling productivity — beyond an abnormally harsh winter?

Various studies mention a primary reason for falling productivity is that businesses have been under-investing in themselves. Capital spending on the “infrastructures of productivity”, such as software, has declined sharply since the onset of the GR. Initially, the reduction of capital spending (belt-tightening) by companies during the early days of the financial collapse improved their financial positions. Lay-offs and pay freezes, justified by the GR, have depressed worker compensation to a multi-decade low, further improving these companies’ bottom lines.

Today, companies are cash rich — at least according to many public companies’ annual reports — and profits are strong, in many cases historically strong. The Dow recently closed above 17,000 for the first time ever and we’ve been enjoying employment growth of some 200,000+ jobs per month for most of 2014.

Now Is the Time to Invest in Productivity Tools

Although companies, including some of our customers and many of our prospects, did tighten their belts, and their purse-strings, choosing not to invest in software to reduce the cost of their point-of-sales marketing initiatives — That time has passed.

For consumer goods suppliers and distributors, especially in the beverage market, now is the time to invest in point-of-sale marketing technology that will not only track and reduce the costs associated with POS marketing, but technology that will also measure the outcomes of your point-of-sale promotions. Armed with this information you can now make marketing decisions that will most likely have the highest return on return-on-investment.

And this investment in POS marketing technology will enable you to track, measure and manage your at-retail marketing programs, and lay the foundation for your company’s higher sales productivity for many years to come. 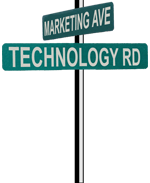 *The technical indicator of a recession is, “Two consecutive quarters of negative economic growth as measured by a country's gross domestic product (GDP)”.