LineTrak™, a combination app and software package to track draught system compliance, now also serves as a powerful tool to increase a wholesaler’s representation on the beer tap with a new Tap Handle Survey™ feature within LineTrak™. 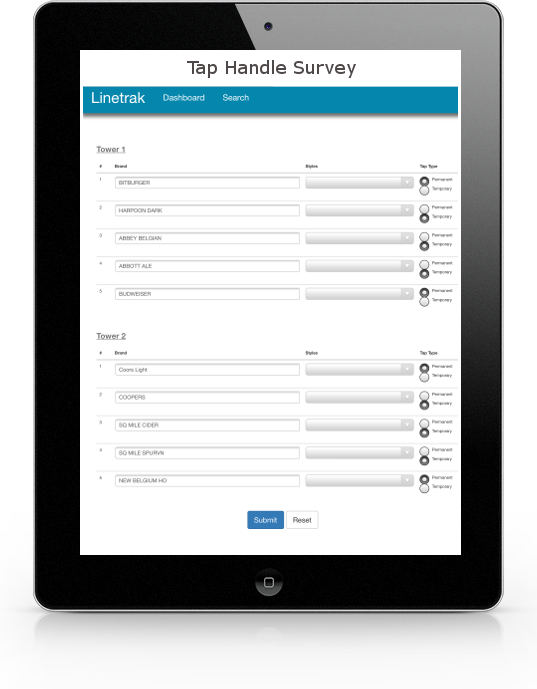 LineTrak's Tap Handle Survey™ feature collects and tracks market data so that wholesalers can learn which products are flowing through active taps, and when a product is replaced by another product.

The new, no charge, surveying feature provides constant data on a beer wholesaler’s presence in any particular establishment, logging every beer brand and its position on the tap. Armed with this information, sales representatives are better positioned to recommend changes and replacements that further increase the beer wholesaler’s business.

Now LineTrak™ plays a dual role as both a vital operational tool, and a strategic intelligence system that dramatically increases a beer wholesaler’s chances of not only improving, but maximizing its presence on beer taps.

The release of LineTrak’s Tap Handle Survey™ feature provides an excellent opportunity for wholesalers to affordably gain significant efficiencies for draught line cleaning while at the same time using it to gain an advantage over any competition on the same tap. It’s a new marketing intelligence feature that will most likely pay for itself, and then some.

The Tap Handle Survey™ feature is available to all current and future LineTrak™ mobile app customers at no additional charge.

To request a live, 30-minute custom demonstration of LineTrak™ and the Tap Handle Survey™, click this button: